10 Songs of Freedom for John Pat

In an uplifting opening concert for this year’s Melbourne Festival, Big hART joins forces with a luminous range of talents – including Archie Roach, Lucky Oceans, Emma Donovan, John Bennett and many more – for a towering evening of song. MURRU is a musical tribute to John Pat, a young Yindjibarndi man who died in custody thirty years ago, sparking a royal commission and shining a spotlight on the increasing rates of Indigenous incarceration in our country.

Combining breathtaking imagery from the Pilbara region with beautiful harmonies and arrangements, co-written by inmates from the Roebourne prison, MURRU is an exuberant and heartbreaking celebration of our country – a hymn to the land and its people, a remembrance of those we’ve lost and a paean of hope for the future.

BEFORE the cONCERT
Directly before the MURRU concert to mark the beginning of the 2014 Melbourne Festival, Federation Square hosts TANDERRUM for a second year – a powerful event and celebration of the ground we stand on and of the people whose ancestors walked it before our time.

MURRU is part of the Yijala Yala Project, a long term, multi-platform, intergenerational cultural heritage project also represented in this year’s program by Big hART’s production of Hipbone Sticking Out.

The Yijala Yala Project is sponsored by Woodside-operated Pluto LNG through its Conservation Agreement with the Australian Government.

Big hART is supported by the COINS Foundation and the Bertha Foundation.

Add 3 or more events to MY EVENTS
to save 15% off your tickets*.

Or continue this single event booking.

ALSO IN THIS SERIES 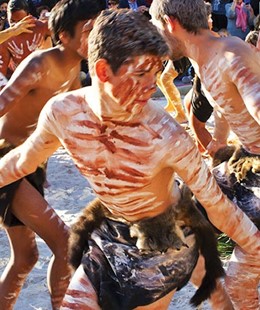 10 Oct
This year’s Festival once again commences with TANDERRUM – a celebration of the ground we stand on, … Read more Theatre

10 Oct - 23 Nov
In the contemporary bustle of Melbourne’s CBD, few of us can conceive what the landscape would have … Read more

We've teamed up with some of Melbourne's best dining establishments to keep you nourished. Read more

Win a trip to New York

Experience Manhattan from all angles thanks to China Southern Airlines. Read more